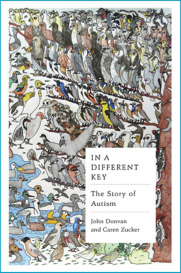 In May, 2015, the DSM-5 streamlined the diagnostic criteria for autism. The new collective term, autism spectrum disorder, embodies a history of complexity and conflict around autism. Divisions have existed in the autism community itself. Opposing views, approaches, and objectives have fired up rivalries between parents of autistic children, scientists, psychiatrists, educational and political bodies, and those diagnosed with autism. Our society is pushing for acceptance of diversity and rejection of labels that define and limit identity, and the way we view autism is similarly challenged and questioned—difference or disability? However, decades earlier, when autistic characteristics were first recognised, the social climate was vastly different.
In A Different Key: The Story of Autism is not a memoir, neither is it a clinical narrative. It falls somewhere in between. The authors have captured the art of storytelling and the book therefore has a broad appeal, beyond those directly involved or affected by autism. Coauthors John Donvan and Caren Zucker deliver a fact-filled and engaging read, addressing, but not necessarily concluding, the autism chapter in psychiatric terms, and opening the doors for the philosophy of neurodiversity. This book explores the common, and less known, characteristics of autism, and takes the reader on the long and bumpy road to try and understand, treat, and even cure autism.
The story opens with one of the first children to be diagnosed with autism, Donald Triplett, born in 1933 in Forest, MS, USA, and his parents, who sparked a chain of events that eventually put autism on the map. At that time, it was common for behaviours that Donald exhibited to be labelled “defective”, “retarded”, or “feebleminded” with recommendations for immediate and indefinite institutionalisation. The Triplett's were advised, as were many parents, to put their child away and move on. However, the Triplett's refused, and they started a trend as activist parents providing a voice for autism.
The book takes a chronological approach, and the case studies are woven, some overlapping, into the timeframe. The reader is introduced to child psychiatrist Leo Kanner at Johns Hopkins Hospital (Baltimore, MD, USA) through Donald's father sending a report of his son's unusual behaviour. Kanner was an influential but controversial figure in autism research and treatment, and he was the first to use the term “refrigerator mother”, which, quoted in Time magazine in 1948, became the mother-blaming metaphor for autism. The finger pointed to the mother who had failed to affectionately bond with their child, and were therefore considered culpable. Kanner later retracted this theory, but it was revived by the Austrian-born Bruno Bettleheim with great vigour, to the detriment of understanding autism.
Bernard Rimland, who had a son with autism, obtained his doctorate in experimental psychology and devoted his life and work to looking for the cause and possible treatment. In London, UK, psychologists Beate Hermelin and Neil O'Connor pursued a biological rather than psychogenic basis to autism at the same time as Rimland published Infantile Autism: The Syndrome and Its Implications for a Neural Theory of Behaviour in 1964, slamming the refrigerator mother concept in favour of biological causes. The same year Ivar Lovaas began to experiment with applied behaviour analysis (ABA) in London, UK, in an attempt to modify behaviour, using electric shock treatment as an aversive therapeutic technique. Despite its use of systematic punishment to reduce self-injurious behaviour, ABA was widely adopted, until the validity of the results of Lovaas's pivotal 1987 study were questioned.
Many other milestones are included in this comprehensive and illuminating history of autism as a disorder that has confounded both psychologists and neurologists. Among others, Donvan and Zucker introduce Hans Asperger, after whom Asperger's syndrome was named. Asperger believed his patients possessed a superior intelligence and originality of thought, differentiated from Kanner's patients he regarded as “psychotic or near psychotic”. Today the syndrome is “far better known than the man himself”.
The book acknowledges decades of contributions to autism research and awareness, such as Simon Baron-Cohen, Alan Leslie, and Uta Frith's study, Theory of Mind, and Temple Grandin's autobiography Emergence: Labelled Autistic. The 1998 film, Rain Man, also gets a mention for attracting public interest. Not forgetting the invaluable role of influential organisations, particularly National Alliance for Autism Research, Cure Autism Now, Autism Speaks, and the tireless activism of parent-led groups.
From cover to cover this book stirs up a combination of emotions. Admiration for the parents that took a stand; incredulity at treatments and assumptions; and gratitude to scientists and activists that dedicate their expertise and devote their energy to making people with autism spectrum disorder feel part of a world that appears to fear non-conformity to what is considered normal.
Ari Ne'eman, proud of his autistic identity, and a vocal campaigner in the 21st century for not curing autism but accepting it, founded the Autistic Self-Advocacy Network with the premise that neurological variation makes “all autistics as unique as any other human being”. However, autism remains a complex condition with dissenting voices. You must read this book, for many reasons—including to find out what happened to Donald Triplett.